What is it? The Framed Basswood.

That doesn’t tell me anything, what is it? It is an all carbon gravel bike designed for long days and big miles. The geometry is a little more on the relaxed side of the gravel equation which lends itself to tracking well and holding a line even when the road gets gnarly. It also has a lot of mounts for fenders, racks and water bottles if the bikepacking mood were to hit.

Specs? I wanted simplicity so I went with a SRAM Apex 1x build kit which includes the shifter/levers, rear derailleur, PG-1130 cassette and 1x crank. Stopping is made possible by TRP Spyre flat mount disc with 140mm rotors. The wheelset uses PUB hubs and Alex Rims Draw 2.1 hoops with 100x15 front and 142x12 rear spacing. A major selling point for me was the threaded bottom bracket. I did swap the stock bars for a set of Framed carbon drop bars and I also swapped out the 100mm stem for an 80mm one I had sitting around the house (the reach was a little longer than I wanted). Additionally, I put on my preferred saddle of choice, a Fizik Arione.

How did it show up? I opted to have Framed assemble the bike for me, so it showed up ready to go. All I had to do was put on the front wheel, insert the seat post and straighten the bars. What impressed me most though was the amazing job they did packaging the bike up after assembly. Every part of the frame had a protective wrap of some sort ranging from some cool foam stuff that stuck to itself to cardboard taped or zip-tied in place. 15-20 minutes after opening the box the bike was ride ready. Too bad I wasn’t, I received delivery confirmation while at work and ran home at lunch to take the bike inside and get my first real life peak at it. 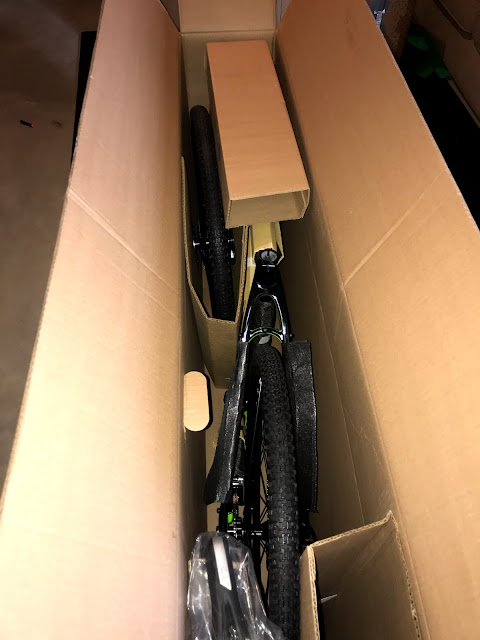 First ride impressions? My first ride was with the bike completely stock, except for the saddle. It was a slightly windy day with temps in the mid-50s and I may have been slightly overdressed (not that it really matters for this review). My first six miles were on paved roads and a little bit of paved bike path. The initial impressions were good. The 40mm Maxxis Ramblers at 40psi did a great job of taking the edge off the many potholes and bumps the Michigan roads threw at it. The power transfer was good and spinning up to speed was unencumbered, albeit not quite road bike quick thanks to the slightly heavier tires.

I stopped a friend’s house so I could have a cohort on my adventure and did a quick saddle angle adjustment; I felt like I was going to slip off the front but that is all on me from when I put on the Airone. The next few miles were more pavement, but a few nice rolling hills were added. While none of the climbs were really anything to get excited about they did give me the opportunity to see how the Basswood would handle out of the saddle pedaling. The answer is very well. The frame and BB area are very stiff and they serve the bike well. No matter how hard I pushed the peddles the frame never felt flexy of noodle-y. 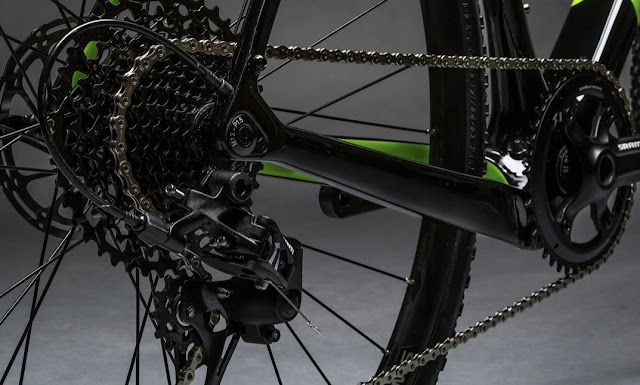 Nine miles into the ride I finally got to ride some gravel. Conditions were a bit of a mess; the temps for the past week were constantly fluctuated between being above or below freezing so the gravel had a bit of everything from ice to hardpacked gravel to soft freshly grated mess and a bit of everything else thrown in for good measure.

On hard-pack cruising along was as easy as expected. The bike is made to keep you moving down the road at whatever speed you can push it. I was able to get into a comfortable position and settle in to spin. When the road got a bit bumper the geometry really came into its own. The bike holds a line over washboard roads yet is maneuverable enough to dodge potholes and puddles when the need arises.

As the ride progressed, I became even more comfortable on the bike. The handling is confidence inspiring and the design means I never got out of shape in any of the conditions I hit. The 40 mile ride had a wide variety of conditions and it handled them all well.

One thing I did notice and how I described the bike after this first ride was: overall, the bike is a very comfortable place to be and it rides well, if a bit stiff. The ride was not quite harsh, but at times could be a little more jarring that I expected.

How can the ride be improved? Enter set-up change number two. I converted the wheels to tubeless, which was very easy. The Draw 2.1 rims are tubeless ready as are the stock Maxxis Ramblers. Using a set of Stan’s tubeless valves and sealant, I had both wheels ready to go in less than half an hour including time to clean up and get distracted by Pandora messing up on my phone. The ride was noticeably better after the conversion. Don’t get me wrong, the box section downtube and oversized BB area are still very stiff, but the harshness is greatly reduced and the overall ride quality was just that bit more pleasant. 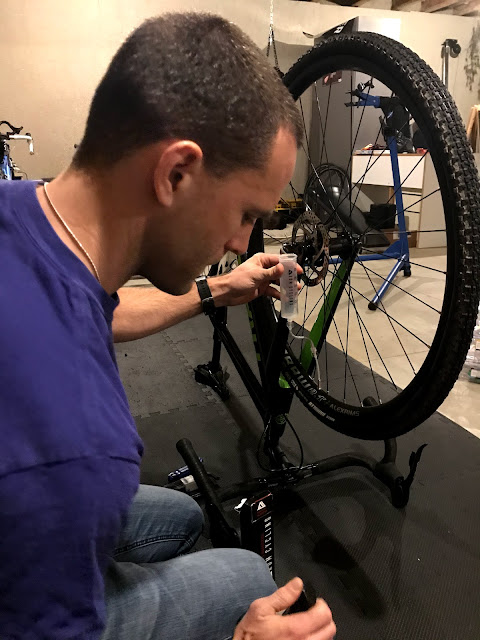 You say the Basswood is designed for long days and big miles, is it still fast? Let’s just say the bike will not be a limiting factor. When I stand up to sprint, sprinting is what happens. There is no frame flex, the bike just goes like a gravel bike should. While the frame is not a pure race design, racing it will not put it out of its comfort zone. I will be doing a few gravel races on it this year and I will in no way be at a disadvantage due to the geometry. Two of the races are 200+ miles and these types of races are an additional reason I went with the Basswood; it eats up miles and keeps going for more. If you do want to get the most out of this bike I would again mention converting to tubeless, it changes a good bike in a great bike.

Tell me something interesting about this bike: The green accents look really good and the finish is top notch. Okay, not what you were looking for. How’s this; the drive-side chainstay is dropped to give extra tire clearance. Framed say it will take a 700x47mm tire, but I would bet you could go a little wider if you knew there was not going to be any mud to worry about. If you were to put on 650B wheels tire clearance would be bumped even wider.

What are a few of the important specs? The drivetrain is a 42t chain ring with an 11-42 cassette; plenty of gearing unless you hit the biggest of off road climbs, but if that is the case you should probably be on a mountain bike anyway. Claimed weight is 19.5lbs. This is adequate. It is not the lightest bike on the road, but it is nowhere near the heavy side of things. Not to mention a few small changes can drop the weight a bit. The brake rotors are 140mm, plenty for the rear but maybe a little small on the front, some more time will answer this question. The 54cm frame has a top tube length of 55cm and wheelbase is 1025mm. The wheels are good, but I will probably upgrade them in a year or so. I've heard great things about the PUB 700c carbon wheels.

What are your final conclusions after the first 100 miles of riding? The Framed Basswood is a very capable and comfortable bike. The Apex build works and the weight puts it in a very competitive market position and helps the Basswood hit well above its weight class. If you are looking for the flashiest parts and the most advanced tech this may not be the bike for you, there is nothing like a future shock and the derailleur and crank are not made from carbon coated unobtainium, but it is a solid ride and it does exactly what it sets out to do: it get wheels on gravel and puts smiles on faces. 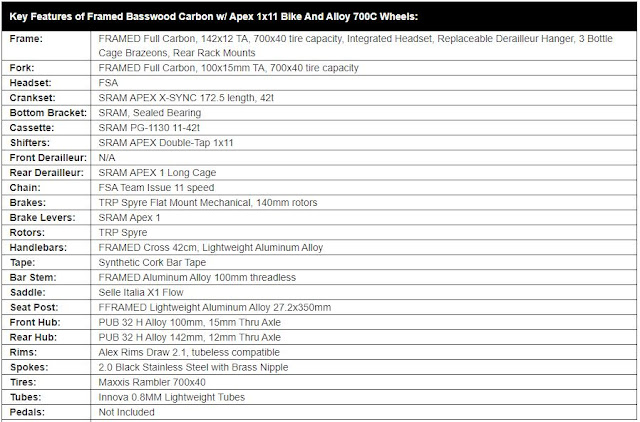 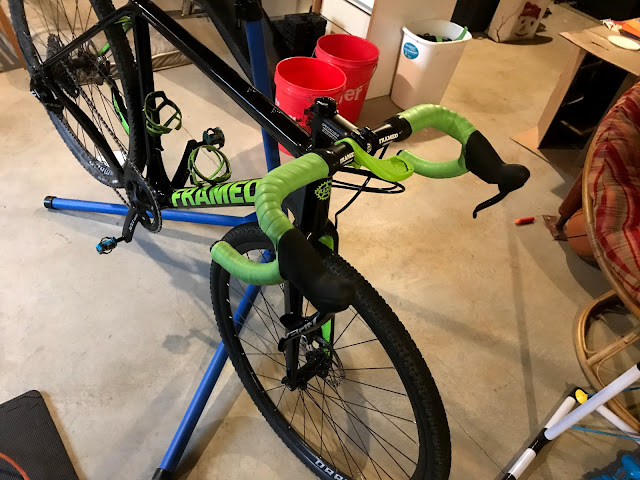