Sometimes a race just does not go your way 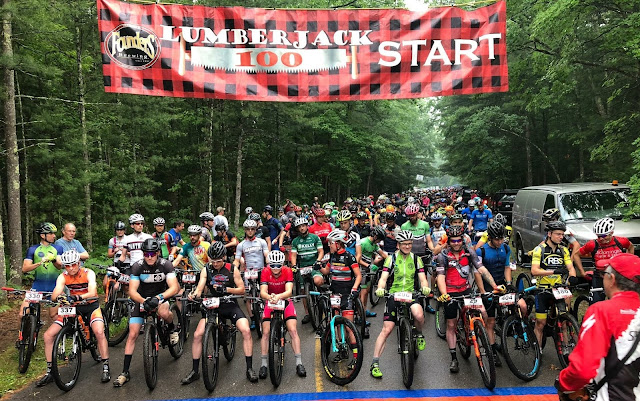 When you finally hit your limit, that wall, when you find yourself mentally in that deep dark place, how do you respond? How do you push through? How do you keep going? These were all running through my mind about 45 miles into the Lumberjack 100. Not even half way through the race and my mind was getting deeper and deeper into that hole with every pedal stroke. Nearly every fiber in me wanted to stop, more than I have wanted to in any other race.  My body just felt spent.

And justifiably so. Leading up to Lumberjack I had raced:

My longest break was the three weeks between CTC and Mohican, with only two weeks between the others. Again, just two short weeks out from Mohican and I was riding the struggle bus on the fast, flowy trails of Big M, near Manistee MI. My fourth go round of the Lumberjack 100. I put in solid performances at the first three races, but the week leading up to Lumberjack I was dragging, my body was giving me some very obvious clues it had been pushed a bit far; I did not listen. 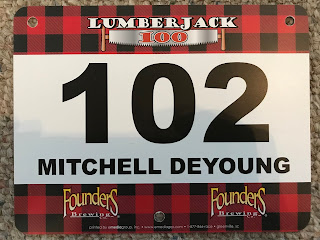 How it went down.
Leading up to race day I was very excited to race Lumberjack again. I knew the course, I had raced it in each direction (it switches between clockwise and counter-clockwise each year) and I was ready to see how my training was paying off. This was my first race of 2018 which I had competed in before, I wanted some confirmation I am faster than ever before.

I drove up Friday with Brett Miller. After picking up our race packets we set up our pit row tent and headed out to pre-ride part of the course. We rode the start section and the last 6 miles; it had a number of sandy sections and some leaf cover but it was in great shape and fast. My legs were feeling good and I was getting more excited to race. Shortly after we finished and got back to the cabin it started to rain softly, which continued on and off through the night. When I woke up Saturday morning it was still spitting a little and everything was wet.

We arrived at the Big M trailhead at 5:30 am on Saturday, beating most of the rush and quickly getting a parking spot only to have the sky open up as we were unloading our bikes. We jumped back in the car and waited a few minutes for it to quit. Ten minutes later we had taken all of our stuff to our pit tent and started get ready to race.

I rode up and down road for a quick warm-up and found a spot in the second row for the start of what I was sure was going to be an incredible race. The race was off, stating with two miles of paved road in an attempted to stretch out the pack, then it turned on to two-track and finally hit some single-track, bringing the racers through the pit/finish area after about 4 miles. I was happy with my starting position; in fact, it was the best start I had for LJ yet. The only down side was due to all the rain on the road I could barely see through my glasses. Over the next few miles I picked my way passed a couple of racers and found myself with Team Spin rider Sebastian Stankiewicz and one other rider (I have no idea who he was, but he had a pink helmet). I had one quick stop when I dropped my glasses while trying to put them in my pocket, but other than that the three of us kept up a great pace. Shortly after the aid station at mile 17 we caught up with another group and rode as a larger pack for the next 5 or so miles.

Next was the surprise of the day. Just after turning on to a small section of two-track we rode up on the lead group. From what I could gather they had slowed due to someone getting a flat, but we were now a group of about 20 leading the race. The slow-ish roll continued for about 2 miles until we got back on the single-track and the lead group slowly pulled away (no surprise there). I came through pit row still feeling strong and confident.  The rain had packed down the sand and the course was even faster than the day before.

I swapped out my bottles for fresh ones (filled with Sustained Energy and Fizz), changed my gloves and was back underway in about one minute. Back on course I still felt strong until I hit the only real sustained climb of the day, a half mile long slog about 1.5 miles from the lap/finish line. The mental slide had begun, except I tried to ignore it. I focused on turning the pedals and not on getting my mind right. As I rode on I slid further down that slope of negativity: I’m tired, my legs hurt, when will I be done, how am I going to do this. The more I rode the more negative my thoughts became. Once I finally realized what I was doing I was further down that rabbit hole that I had ever been. 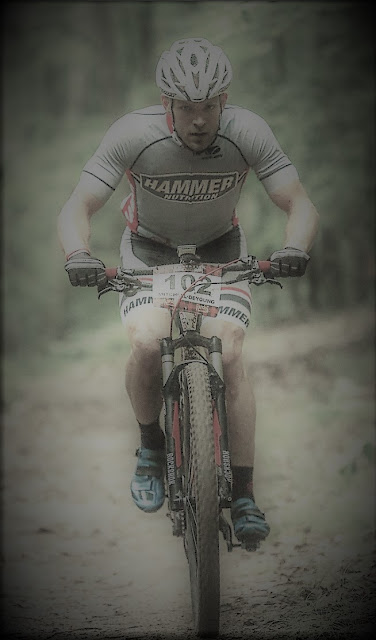 Somehow through all of this I kept turning those pedals. I tried to convince myself I was having fun, tried to get a song (any song) stuck in my head, I just kept moving because I knew if I stopped it was game over. That one part of my brain kept me pushing on, saying “you have never quit a race! You have never just stopped! And you are not going to now!” (I have DNF’d due to mechanical issues but that is another story). I got passed and did not care, but I kept moving.

When I finally rolled through the pit area to finishing my second lap (about 66 miles), I was shocked to see my second lap time was the same as my first. Granted the first lap was 4 miles longer, I had never put up consistent lap times before. My best to date was in 2017 when my second lap was 6 minutes slower than my first. I really have no idea how I managed this feat, but it was enough to bring a new spark of life back to me. I was not out of my dark, dirty place, but I could see a way out. This time I was stopped for about a minute and a half so I could scarf down part of a PB&J, swap out some more fresh bottles and I was back at it.

The big hill was still a challenge and I was in an easier gear than the lap before but instead of descending mentally I was making mental gains. Another few miles in and I was passed by a few racers and I decided I was either going to ride with them or slow down even more, and slowing down did not sounds like what I wanted to do. The two racers on the front rode away but I stuck with Peyton Randolph (the eventual single speed winner). We spent the next 20 miles riding together and chatting about the course, previous races and just about anything else to take our minds off the race. This was an absolute life saver for me. My mind was somewhere else; I was no longer focusing on negative thoughts. The longer the two of us rode together, the better I felt and rode. With about 5 miles to go we hit some hills and unfortunately Peyton was not able to keep up but I was able to push myself again. I rode the last five miles about a minute faster than I had on lap two, passing a number of people who had passed me somewhere between laps two and early in lap three.

I came though the finish in 7:26:29 in 21st place in the men’s open race. I was four and a half minutes faster than 2017. It really was bittersweet, I improved my time, and better yet, I was significantly closer to the winner’s time; in 2017 I was 57 minutes back and this year I was 45 minutes back, a gain of 12 minutes. But I know I am capable of so much better; had I not been so worn down from my earlier races my time could have been faster. Such is life with an overloaded race schedule.

Post-race musings
When I sat down to figure out my race schedule for 2018 I knew I had packed a lot in a short period of time. So much so, I was concerned with how it might affect my performance as the races progressed. Concerned, but willing to try it anyway; over 500 miles of racing in just 7 weeks. As I said, a lot of racing in a very short period of time. In previous years I tried to get at least three weeks between races if not four or more, in fact the main reason I had not raced Mohican prior to this year was because it was only two weeks before Lumberjack and I knew it was not enough time to recover.

After the success I had last year and the great training I have been able to do in preparation for this race season I thought I stood a good chance of making through the over 36 hours of racing it would take to complete these four events, without a catastrophic breakdown. For the most part I would call the experiment a success. I made it through all four races. One AG win, one top ten, an 18th and a 21st are all results to be proud of. Next year I will spread my races out a bit more, two races close together is manageable, but to have four in such a short time frame is something I only need to do once.
Experiment Done!

Looking back, I am glad I set up my schedule the way I did. It really made my dig deep and work for every last mile. In a way it was a bit of a confidence booster to know I can push through so much and still succeed; not only in my races but developing a training plan I was able to stick to while still spending time with my wife and kids, not to mention working a full time job.

Fuel Plan
For each lap I carried one bottle with a combination of Hammer Nutrition Sustained Energy and HEED as well as two bottles of Fizz for hydration and electrolyte replenishment. I also took BCAA+ and Anti-Fatigue caps at each lap and started the day with Fully Charged and Race Caps. Post-race I had my Recoverite and a nice pulled pork sandwich. As always, I carried some extra Hammer Gel and a flask of Perpetuem as surplus.

Time for a break
Now I have a six week break before I head to the Wilderness 101 near State College, PA. Time for a little R&R and maybe even a few actual training sessions. 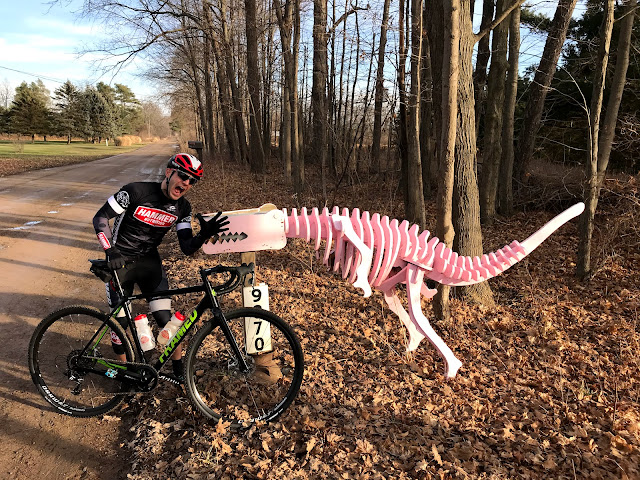